The New England Commonwealth was one of the thirteen commonwealths of the pre-War United States.

Created in 1969, it was comprised of the former states of Maine, New Hampshire, Vermont, Massachusetts, Rhode Island, and Connecticut.[1] The commonwealth bordered the Eastern Commonwealth and the country of Canada.

A resident of the pre-War town of Salem named Andrew Endicott was abducted from his home by zetan aliens in 1697.[2]

The region was spared much of the nuclear devastation of the Great War as the greater Boston area was only hit by one nuclear bomb, which missed and hit an area to the south. The radiation from the nuclear-strike zone still remains potent 200 years later.

Different factions would vie for control of the region, including multiple raider gangs and small settlements. The survivors of the Commonwealth Institute of Technology took shelter in the basements of the college buildings and would form the Institute, a technologically advanced and enigmatic faction. The failures of their technological pursuits would be thrown out in the wasteland, littering the region with super mutants and synths.

A militia group known as the Minutemen grew to prominence, defending the major settlement of Diamond City against a super mutant attack in 2180. Eventually, a unified government in the region was proposed called the Commonwealth Provisional Government. Every settlement of influence was invited to talks discussing the idea but during the meeting, a synth killed every representative, destroying the Commonwealth Provisional Government. An underground movement was formed to combat the Institute, known as the Railroad, with the aim of liberating synths from Institute control.

Over time the influence of the Minutemen waned due to setbacks such as losing their main headquarters, as well as internal conflict. This culminated with the Quincy Massacre, where the last of the Minutemen tried and failed to defend the settlement of Quincy, leading to the faction's near extinction.

The Brotherhood of Steel would soon enter the region as well, having previously sent recon teams to scout the area and to investigate abnormal energy readings. They eventually mobilize their forces, bringing them to the Commonwealth and claiming the Boston Airport as their center of operations.

Near Boston, Nuka-World was originally a pre-War amusement park built by the Nuka-Cola Corporation. The founder and CEO of Nuka-Cola, John-Caleb Bradberton, entered in a military contract with the United States Armed Forces as part of Project Cobalt in order to fortify his park against nuclear war. This included the installation of military-grade robots into the Galactic Zone and a life-suspension technology for Bradberton himself.

The deal was only partially honored by the military however, as when the bombs fell, Project Cobalt was abandoned along with the Beverageer Division and any other Nuka-Cola employees while John-Caleb Bradberton was abandoned as a living head stuck inside his personal vault.

Of the Nuka-Cola employees that survived, several banded together and fortified Kiddie Kingdom against outside threats. Background radiation eventually rendered them all ghouls. Poor experiences with outsiders forced them to adopt an isolationist attitude and these survivors would slowly turn feral until by 2287, only Oswald the Outrageous was left sane and alive.

Over time, a peaceful trading settlement was formed in Nuka-Town USA by settlers. In 2286, a coalition of three raider gangs including the Pack, the Disciples, and the Operators joined forces to overwhelm these traders and enslave the survivors.

Originally Mount Desert Island, the Island, as it came to be known, was not directly hit by nuclear bombs. Instead, the Island was blanketed by a persistent radioactive fog. Settlers on the Island were able to deal with this with the use of fog condensers, rendering areas of the Island habitable.

In 2287, it was the site of a three-way power struggle, between the settlers of Far Harbor (formerly Bar Harbor), the Church of Atom cultists based out of the Nucleus, and the secret synth colony of Acadia.

The New England Commonwealth appears only in Fallout 4, and is mentioned in Fallout 3 and its add-ons The Pitt, Broken Steel, Point Lookout, and Mothership Zeta, as well as Fallout: New Vegas and in the Fallout 76 Wastelanders update. 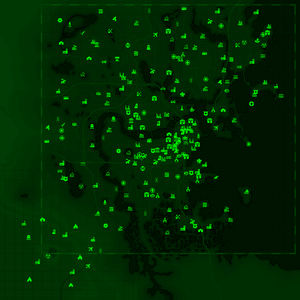 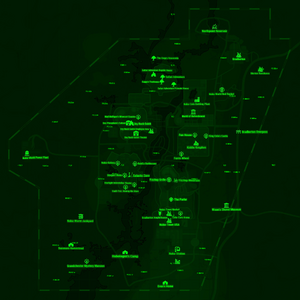 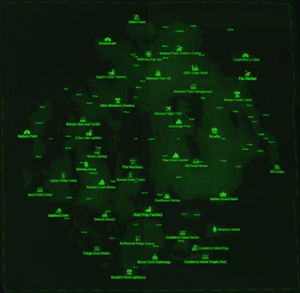 Map of the Island
Add a photo to this gallery

Retrieved from "https://fallout.fandom.com/wiki/New_England_Commonwealth?oldid=3360262"
Community content is available under CC-BY-SA unless otherwise noted.