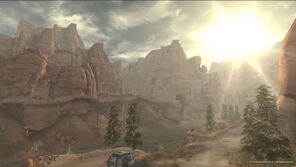 The New Canaan-Legion War was a conflict that began in 2277.[3] The results of the war depend on the Courier's actions.

Shortly after the Legion's loss at the First Battle of Hoover Dam, Joshua Graham made his way home to New Canaan, welcomed back a scarred survivor of Caesar's wrath. This angered Caesar, as he knew that if Joshua Graham could rally New Canaan into fighting shape it could threaten or end the Legion's influence in Utah.[4]

Frumentarius Ulysses was sent to the White Legs, a tribe petitioning for absorption into the Legion to rally them against the growing threat of New Caanan. He successfully organized them into a formidable fighting force and marched onto the lands of New Canaan.

The town of New Canaan was destroyed in a violent slaughter leaving only 30 or so survivors. These, under the leadership of Joshua and Daniel, led them to refuge in Zion with their tribal allies.

It is known that Joshua and Salt-Upon-Wounds, chief of the White Legs, had a confrontation during the Canaanites' flight to Zion, where Graham warned the chief not to persist in his attack for fear of retribution.[5] The chief did not listen and followed the Canaanite refugees into Zion.

In Zion the White Legs succeeded in destroying Canaan's allies the Tar Walkers and the Crazy Horns, leaving only the Canaanite survivors, the Sorrows, and the Dead Horses to fight the White Legs.

The Courier has three options, two potentially canonical and one non-canonical.

In this ending, the Courier sides with Joshua in the argument between him and Daniel. Joshua then leads the Courier along the Virgin River to the White Legs' camp at Three Marys. There they meet up with Canaanite, Sorrow, and Dead Horse warriors already besieging the camp. The Courier is separated from Joshua Graham, barely arriving in time to either witness Joshua kill Salt-Upon-Wounds or stay his hand and let him go free.

In this ending, the Courier helps Daniel evacuate the Dead Horses and Sorrows from Zion Canyon. The White Legs remain unchecked in Utah, and it soon falls under the Legion Banner.

If the Courier kills an essential character, this quest is activated, prompting the player character to find a map and prematurely leave Zion.

Retrieved from "https://fallout.fandom.com/wiki/New_Canaan-Legion_War?oldid=3338302"
Community content is available under CC-BY-SA unless otherwise noted.