The New Appalachian Central Trainyard is a location in the Savage Divide region of Appalachia.

Located in the lower mountains of the Savage Divide, the New Appalachian Central Trainyard served as a transport hub. Situated alongside Highway 63, proximity to the major highway allowed for convenient rail to road freight transport.[1]

Before the Great War, the location was targeted by Cary Skinner, an individual who conspired to rob a New Appalachia Bank armored train car.[2] Skinner enlisted the help of switch-tower operator Al Wortzik to assist in manipulating the tracks.

The day of, Skinner had their brother stand in for one of the guards after the original guard was successfully bribed to "lay low."[2] The heist was not successful, due to an explosion at the bank causing the building to be inhabitable while simultaneously causing several deaths.[3]

The railyard is filled with several derailed trains and traincars, their contents spilling out and into craters in the ground below. The parking lot has several cars parked near the platform underneath the "to all trains" signs, one of which is a cop car. The building that is situated between Highway 63 and the railroad tracks is a strip mall style combination of ticketing lobby, bank, and post office.

On the building's roof is a cooking station and some junk items. There is a scene with two teddy bears, one examining the other, and the remains of an individual who was tending to birds and collecting bird-related tchotchkes. A deceased raider hangs over the edge of the rooftop near the cooking station.

At the southern end is a train maintenance warehouse with weapons and armor workbenches. At the northern end of the location is the railway switch operator's tower. On the far end of the trainyard, another watchtower is situated next to a water tower. 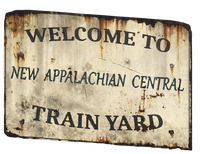