The Nevada Highway Patrol station is a former law enforcement outpost on the I-15 south of Primm in the Mojave Wasteland. It is being used as a base of operations for members of the Jackals in 2281.

This base used to serve law and order on Nevada's highways, providing the basic facilities for policemen on duty. Long abandoned, it's been taken over by the Jackals, who use it as an outpost while fighting off the wildlife, feral ghouls, and escaped convicts that appear in the area.[1]

The station is easily identifiable by the black-and-white highway patrol car hulks outside and the large billboard pillar to the north. A couple of Jackal gang members patrol the outside with their leader. A number of convicts and feral ghouls can appear and fight with the Jackals. The hilly area to the west of the station is also infested with feral ghouls, which occasionally approach the station.

Two convicts will spawn on the highway when the Courier first enters the area, and will give a warning to back away before they resort to more hostile measures. Getting any closer at this point will cause them to attack. If left alone, they will walk toward the patrol station, where they will fight with the Jackal gang leader lurking in front of it. An additional Jackal gang member waits at the south side of the station.

In front of the building are a few run-down police cars, one of which contains a skeleton and two suitcases containing 20 stacks of pre-War money and some Jet. The entrance, with "FUCK YOU" spray painted on it, is to the right side of the building. Also written on the north wall is "I wish I was at the Sierra Madre."

When the Courier enters the station, two more Jackal gang members will be directly inside. They tend to resort to melee weapons when they attack, giving a bit of extra time to take them out without incident. The station is mostly intact. The entrance leads into the main area, which served as a break room, locker hall and office space all in one, connecting to the cells and lock-up in the back through a corridor with two break rooms.

A giant mantis nymph also lurks in the first room, in détente with the gang members. This first room also contains a few filing cabinets, a couple of desks and an inoperable terminal. On the rear desk lies a copy of Guns and Bullets.

The door to the left leads to a hallway with two water fountains (+5 Rads) and two bathroom doors, the first of which has a Very Easy lock. This bathroom contains a first aid box with random contents and the first aid box in the other bathroom is always empty. Another giant mantis nymph awaits here, usually in the first bathroom but occasionally in the hallway.

At the end of the hallway is a jail cell room with a dead prospector surrounded by five giant mantis nymphs. Most of the nymphs are trapped in the jail cell, but at least one often begins outside of it. The dead prospector's body will never disappear. A reloading bench, an ammo box and a desk with some chems round out the rest of the room's contents. Most of the containers do not respawn (except for the darker filing cabinets), making the station effective player housing.

Nevada Highway Patrol station is similar in appearance to the real world location of the same name in Jean, Nevada. Geographically, the equivalent location in the real world is the California Agricultural Inspection station, likewise along I-15 in California.

The jail cell, with the dead prospector 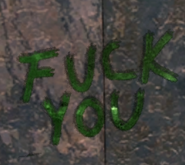 Graffiti found on the door