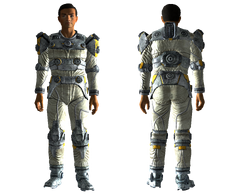 The neural interface suit is a piece of armor in the Fallout 3 add-on Operation: Anchorage.

In appearance, the suit is identical to recon armor, except white and yellow in color. It features a Damage Resistance of 3 and no stat effects.

It is a special armor received during Aiding the Outcasts in the Outcast outpost. It has to be worn in order to enter the Anchorage Reclamation simulation.

The neural interface suit is actually comprised internally of two suits: the one received before the simulation weighs nothing (being a quest item) and is replaced by one that weighs ten pounds upon exiting the simulation. 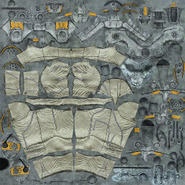