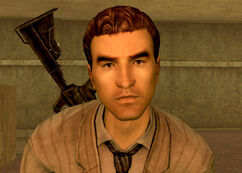 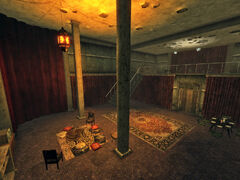 Nero is the head of the Omertas. Unlike his right hand man Big Sal, he is mostly absent in the presence of the general public, instead coordinating the shady operations of the casino from the privacy and comfort of his own hotel room. He thus leaves most of the day-to-day business to Big Sal and the lieutenant Cachino. He does not appreciate callers violating his inner sanctum.

Though he pretends to be loyal to Mr. House and the other Strip Families, he is secretly planning to help Caesar's Legion take over New Vegas. In exchange for being given control of the Strip after the Legion's planned conquest of the Mojave, Nero and the Omertas pledged to Caesar to raid the NCR Embassy and the other Families' casinos. Once the Legion has marched across Hoover Dam, they'll be able to take New Vegas without facing resistance from Mr. House, the other Families, or the NCR.

Collector's Edition playing card
Add an image to this gallery
Retrieved from "https://fallout.fandom.com/wiki/Nero?oldid=3299169"
Community content is available under CC-BY-SA unless otherwise noted.