Increased damage resistance and output when at 20% of total Hit Points.

If an enemy is about to kill the player character, kill them instead 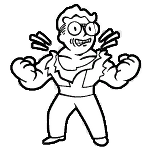 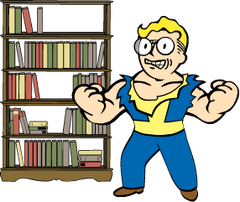 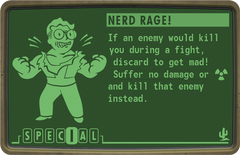 “You've been pushed around long enough! With the Nerd Rage! perk, your Strength is raised to 10 and you gain 50% to damage resistance whenever your Health drops to 20% or below.”— Fallout 3 in-game description

Nerd Rage! is a perk in Fallout 3, Fallout: New Vegas, Fallout 4, Fallout 76 and the Fallout: The Board Game expansion New California.

Whenever the Lone Wanderer's Hit Points drop to 20% or below, their Strength is raised to 10 and they gain 50% to Damage Resistance. This stacks with other perks, and applies regardless of clothing, which makes it still useful even if the Lone Wanderer wears heavy armor, as it can help maintain their DR even if said armor is damaged or broken.

A combo of 35-40 DR protection (average power armor or 100% condition combat armor) and Nerd Rage effect allows to reach max DR (85 percent DR), which means only 15 percent of damage points affecting health, which is four times less than the 60-65 unresisted damage percentage, the average for a heavy armor user. At the same time, it is possible to replenish health in small portions by consuming food or water, without stopping the effects of Nerd Rage.

Whenever the Courier's health drops to 20% or below, their Strength is raised to 10, and their Damage Threshold is boosted by 15. This effect stacks with similar bonuses, and applies even if the Courier is naked or their armor is broken; they merely need to meet the health threshold.

The Courier's base health determines the trigger for this perk. Bonus HP from other sources such as Buffout or the Thought You Died perk will not raise the threshold.

“Genius. Is. ANGRY! When your Health drops below 20%, time slows and you gain +20 Damage resistance and do 20% more damage while the effect lasts.”— Rank 1 description

Nerd Rage! is a perk in the Nuclear Winter battle royale mode. It requires 3 SPECIAL points to equip.

Unlike previous versions of Nerd Rage, time does not slow down due to the multiplayer nature of Fallout 76, however a boost to the Action Points regeneration rate is given instead.

Nerd Rage! is added to the game by the Fallout: New California add-on. When in a fight where they are about to be killed, the player character can discard this perk to nullify all damage and instantly kill the enemy.

Fallout 4 loading screen slide
Add a photo to this gallery
Retrieved from "https://fallout.fandom.com/wiki/Nerd_Rage!?oldid=3463890"
Community content is available under CC-BY-SA unless otherwise noted.