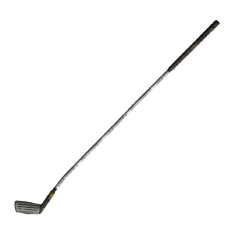 Nephi's golf driver is a unique golf club utilized as a two-handed weapon. Compared to its more common variant, the 9 iron, it is in more pristine condition, having a straight handle instead of the bent one seen on standard 9 irons. It has better critical damage but is more brittle than the standard golf club.

It has a special Fore! attack that does regular damage in V.A.T.S., but at the cost of 4 more action points will always knock down enemies (requires a Melee skill of 50).

It is possible to execute Fore! outside of V.A.T.S. (without the required Melee skill of 50 to perform the move) by initiating a power attack (hold attack button) while moving forward, however, it may not knock the target down on impact.

Nephi's golf driver can successfully strike about 245 times from full condition before breaking.

It can only be obtained by killing Driver Nephi, a Fiend to the southwest of New Vegas.