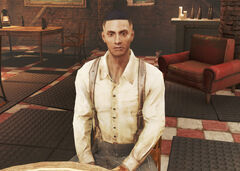 Nelson without his glasses

Nelson Latimer is an associate of the Triggermen living in Diamond City and son of the wealthy Malcom Latimer in 2287.

Nelson is a wealthy resident of Diamond City. According to Henry Cooke, the local upper stand bartender, Nelson is a spoiled and arrogant young man who envisions himself as a crime boss, going so far as to make secret, illegal deals between Cooke and the gangsters of Goodneighbor. He is Cooke's representative in periodical meetings with Trish, who is Marowski's Goodneighbor contact, in an operation to smuggle chems into Diamond City to get around the local taxes imposed by Mayor McDonough. It has been stated that Nelson might cut Cooke out of a deal in the near future.

Nelson Latimer appears only in Fallout 4.