Fallout: New Vegas
“If that's so, how about you look into repairing the solar arrays on the roof of the generator building?”— Loyal

The Nellis array is a location in Nellis Air Force Base in the Mojave Wasteland in 2281. It is located just east of the Nellis hangars.

Outside on the top of the Nellis array are several broken solar panels. The player character will need to pass a Repair check of 65, or have scavenged parts from around the solar collection tower at the back of HELIOS One, which require a 20 Repair skill to acquire, in order to repair these solar panels. No reputation with the Boomers is gained directly for fixing the solar panels, however, completing the quest Sunshine Boogie will earn reputation with the faction.

There is a computer terminal by the gate. Until the generators are powered back on, it displays the error message "ERROR #P38C4K" "Generator power source unavailable". It checks array efficiency when the array is operational again (120% at best).

The inside of the facility is simple, consisting of a small room with a doorway straight ahead of the entrance and another door to the left. The forward door leads to an enclosed gangway that goes over the main generator room below. To the left is another room with a door to the right. The door leads to an exposed gangway with stairs that lead down to the lower level.

The area below the building is sectioned into two areas. The stairs lead into the smaller of the two sections with electric transformers and generators. The larger room contains more electrical equipment, an exit, shelving with ammunition boxes, artillery shells, and giant ant nectar. The exit leads to another exit to the outside by way of a tunnel. There are several generators in the lower level of the array building, which are off by default. Both the upper and lower levels are infested with explosive giant ants, which must be killed along with reactivating the generators for the quest Ant Misbehavin'.

The Nellis array appears only in Fallout: New Vegas. 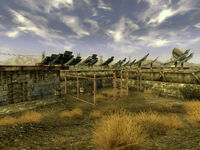 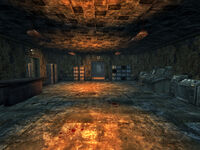 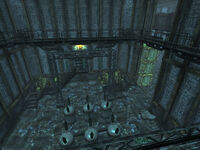