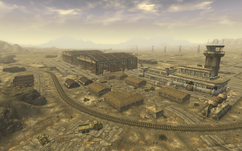 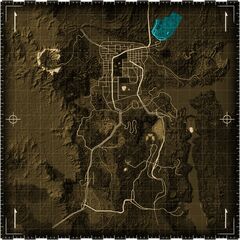 Nellis' location is discreet and well-defended, most accessible by a cracked and cratered road littered with signs suggesting that entrance in to the area is strictly forbidden to all outsiders. The front gate is vigilantly guarded day and night by a howitzer team. Nellis Air Force Base's main entrance can be approached from two different locations, with the most notable one being via the old road leading east from Fields' shack. When approaching from the old road, the player character will encounter George, who provides the Nellis artillery timing details. The second approach can be accessed by the unmarked train tunnel (with a very hard lock) located east of Raul's Shack which avoids the dangerous artillery range entirely. 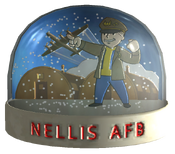 Retrieved from "https://fallout.fandom.com/wiki/Nellis_Air_Force_Base?oldid=2676511"
Community content is available under CC-BY-SA unless otherwise noted.