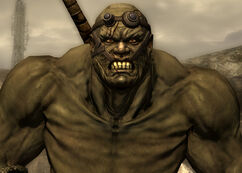 “The future is not written, human, and it is foolish to squint at what cannot be seen.”

Neil is a first generation super mutant living in the Mojave Wasteland in 2281.

Travelling to Black Mountain when it was originally under the leadership of Marcus, Neil was one of the only first-gen super mutants in Black Mountain before Tabitha's arrival and the influx of Nightkin.[1] After the collapse of the original Black Mountain community and the migration of Marcus and his few followers to Jacobstown, Neil was sent to Black Mountain by Marcus to spy on Tabitha, who had previously overthrown him and taken control of the area. He hints at another reason as to why he's not at Jacobstown, but will not elaborate further than that.[2]

Because he is spying on Tabitha, Neil does not respect Tabitha or her rule and considers her to be a mutinous crazy that gained her cult of personality through the same race supremacy rhetoric he's seen before. What's more is that Neil will even go so far as aid in her assassination if it means the mutants at Black Mountain can have a life with less brainwashing.[1][3] Unfortunately, spying hasn't done much good, as none of the second generation mutants were motivated to revolt and oust Tabitha from control. Neil now warns other mutants who pass by the road to Black Mountain to go to Jacobstown instead. Should Tabitha be ousted from Black Mountain, Neil will remain at Black Mountain to point other mutants who may have heard Tabitha's signal toward Jacobstown.[4] He is also a great source of basic information on super mutants and nightkin, if any travelers will listen to him, but has little patience getting into the finer details.[5][6] Because he is a first-generation super mutant, he is significantly more intelligent, calm and polite than most of the other hulking brutes wandering the wastes, but even he has his limits, like being compared to his more reckless brethren just because he is a mutant.[7]

Neil will warn the Courier about the danger ahead, Black Mountain.