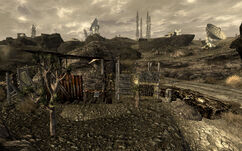 Neil's shack is a location in the Mojave Wasteland. It is east of both Sloan and Quarry Junction.

It is occupied by Neil, a friendly super mutant. As you approach the area, Neil will run towards you and will initiate conversation. He will share valuable information about the area up the road, Black Mountain, and give you the quest Crazy, Crazy, Crazy.

Neil's shack consists of a makeshift shelter that provides little protection from the elements. He has a table outside the shack with his radio (which is constantly turned on), as well as a mattress on the floor that the player can use for sleeping.

Retrieved from "https://fallout.fandom.com/wiki/Neil%27s_shack?oldid=1233949"
Community content is available under CC-BY-SA unless otherwise noted.