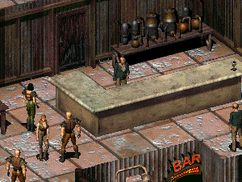 “This is my place, the Skum Pitt. You buy drinks here. And you tip me.”

Neal is the owner of the Skum Pitt in Junktown in 2161.

Neal works at the bar together with Trish, his waitress. While Gizmo wants to take over his bar, Neal does not want to sell it, making him a target for harassment.

One night, when Neal shoots a Skulz member who harasses Trish, he becomes a mortal enemy of the gang. His most prized possession is his wife's ashes which he keeps in an urn on the bar.

Neal appears only in Fallout.

Retrieved from "https://fallout.fandom.com/wiki/Neal?oldid=3500541"
Community content is available under CC-BY-SA unless otherwise noted.