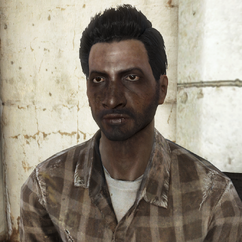 An escapee from the Institute, Naveen wandered the wasteland, scared, lost and alone. Eventually, he heard rumors of Chase, who was seeking out synths that had escaped and would bring them somewhere safe.[1] Through Chase, he joined the synths at Acadia, although he is unsure of what to make of the place. He is grateful for the home, though Acadia was not all that he was expecting.[2][3][4] Perpetually trying to keep up the upbeat attitude, his views on Far Harbor, the Children of Atom, Acadia and DiMA will eventually be determined by upcoming events.[5][6][7][8]

Naveen appears only in the Fallout 4 add-on Far Harbor.

Retrieved from "https://fallout.fandom.com/wiki/Naveen?oldid=3273228"
Community content is available under CC-BY-SA unless otherwise noted.