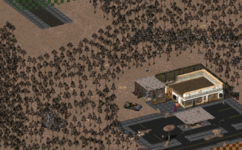 The Navarro gas station is a location on the coast of the Pacific Ocean. The station acts as a checkpoint for the Enclave's military base, Navarro.

The location looks like a typical abandoned Poseidon gas station, adjacent to a road and surrounded by a long-dead forest. In reality, it is a checkpoint for the Navarro base. It is watched over by a man named Chris, a disguised, undercover Enclave guard, wearing distinctive purple robes.

A road to the northwest past the forest serves as the direct entrance to the Navarro base. Inside the shack by the gas station is a hidden entrance to the underground portion of the base, however, the only way to get inside will be to kill Chris as he prevents anyone from entering it. In the southwest, there is another hidden entrance in the form of a vented trap door. This trap door leads to an access tunnel but further down will be a locked door that cannot be opened without a blue pass key.

Retrieved from "https://fallout.fandom.com/wiki/Navarro_gas_station?oldid=3248163"
Community content is available under CC-BY-SA unless otherwise noted.