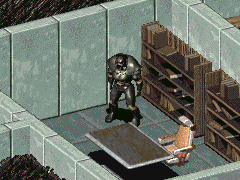 Retrieve the FOB from the base Commander

“Disobeying a direct order of a superior officer is treason. I don't have time to court martial you so I'll handle this myself. Guards! Kill this idiot!”

The base commander is the commanding officer of Camp Navarro in 2241.

A no-nonsense military man of few words, the commander of Camp Navarro has little patience for his subordinates.

To enter his office, the Chosen One needs to pass a Speech check with the guard outside his office under the guise of performing cleaning duties in order to gain access.

The base commander appears only in Fallout 2.

The base commander uses a female proto id (similar to the gate guard and Arch Dornan) but is referred to as a male in dialogue by Dr. Schreber.

Retrieved from "https://fallout.fandom.com/wiki/Navarro_base_commander?oldid=3304410"
Community content is available under CC-BY-SA unless otherwise noted.