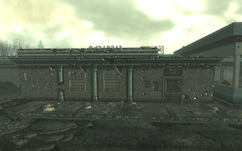 “You are required to report any suspicious persons or behavior to Lt. Krumfolz (DIA) at the US Naval Office located at 1811 St. Mary's Branch.”— Awareness poster for Wan Yang

The Naval recruiting center is a small building in Point Lookout in 2277.

As a recruitment center, it was set up to recruit the citizens and tourists of Point Lookout into the United States Navy.

It also served as a remote Defense Intelligence Agency base in Point Lookout, which could very well have been its primary mission, rather than the recruitment of new sailors. Due to the presence of the Chinese spy submarine SSN-37-1A, and her crew in the Turtledove Detention Camp, many Chinese agents were active in the area. The center had been watching Doctor Jiang, an agent posing as a defector from China, and had already captured Wan Yang, his contact, and sent her to Turtledove.

A small building with a sign hanging above the door. Down the street to the west is the Homestead Motel, and the bank. It is adjacent to the broken bumper car ride.

There are two rooms inside with some radroaches in them. The second room has a terminal, safe, a skeleton holding a double-barrel shotgun, a mini nuke and several custom weapon parts.

The Naval recruiting center appears only in the Fallout 3 add-on Point Lookout.

Naval recruiting center sign
Add a photo to this gallery
Retrieved from "https://fallout.fandom.com/wiki/Naval_recruiting_center?oldid=3397272"
Community content is available under CC-BY-SA unless otherwise noted.