The National Guard training yard is a location in the Commonwealth in 2287.

This training yard was used by the 101st Field Artillery Regiment, 1st Battalion.[1] The facility was expanded in 2077 to include sizable barracks, administrative and recruitment offices, an obstacle course, an armory with power armor maintenance facilities, and even its own dedicated plutonium well for energy independence.[2]

The Great War strongly affected the facility, following the arrival of refugees from the greater Boston area. The military attempted to impose a semblance of order, setting up checkpoints and strongpoints to contain the terrified civilians that swarmed the facilities.[3] However, the efforts proved in vain, as the soldiers were unable to control the crowd, which rushed the building and violence ensued, culminating in the tipping of an evacuation Vertibird parked on the helipad. As the crowds dispersed and the wasteland crept in, automated turrets and mines protected the facility and mostly consolidated the feral ghouls, even two centuries after the war.[4]

In 2284,[5] after being ambushed by unknown assailants in a ruined clinic and losing the rest of their squad, the three survivors of Recon Squad Artemis took refuge in the facility.[6] Paladin Brandis and Scribe Faris left to go to the Revere satellite array, leaving Knight Tara Astlin alone to defend the position. However, she was attacked and killed by the feral ghouls that resided in the facility.[7]

The National Guard training yard is a multi-building compound that served as a training facility and armory for the Massachusetts National Guard before the war. There are few accessible buildings, and the facility is filled with feral ghouls and turrets.

The building has two floors. On the ground floor, there is an entrance hall, bathroom, main room, and an office. Inside of the office is the body of Brotherhood of Steel soldier Knight Tara Astlin. Finding her continues the quest The Lost Patrol. To the right of the main room is a locked door leading to the National Guard training yard, which needs to be accessed to continue the quest Ghoul Problem. The door can be opened with the Expert-level terminal next to it.

This building is entered from the recruitment office. The main part of the bottom floor is inaccessible from this entrance. Stairs lead to the upper floor. There are two rooms on the left and a room with beds to the right. In the first room to the left is a terminal that unlocks the door to the armory building. The terminal can be hacked or accessed using the password found on the upper floor in the recruitment office. In the second room on the left is a Stealth Boy on one of the shelves. Next to the room with beds is a bathroom with half of the floor missing.

The bottom floor is reached by jumping down from the room with beds or the bathroom. In the cafeteria is a U.S. Covert Operations Manual on the table with the blue cooler. Next to this room is a bathroom. A hole in the wall leads out from the bedroom to a small hallway. Next to it is a room with file cabinets. To the right of the hole is the exit (main entrance to the barracks). On the other side of the exit is a terminal that unlocks another door.

The armory is located directly behind the barracks and the recruitment office. The armory can be unlocked from a terminal inside the barracks or by picking a Master level lock. The armory consists of three small rooms. The first room has four laser tripwires, which activate a machine gun turret and a Protectron when tripped. To the rear of the first is another room which contains a weapons workbench and an armor workbench as well as a feral ghoul, who is lying on the ground. This room also contains a green trunk that contains random ammo and weapons.

To the right of the first room, and behind the locked security door, is the power armor storage room. The terminal can be accessed with the National Guard officer's password which is located on the second floor of the recruitment office. The room contains a leveled feral ghoul, as well as the power armor frame and assorted ammo and junk. The action of unlocking the room with the power armor frame will also open the small building behind the armory building, activating and releasing the sentry bot inside.

The National Guard training yard appears only in Fallout 4. 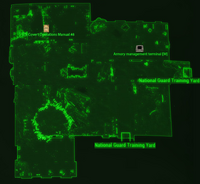 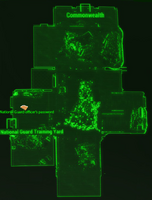 Terminal on the second floor of the barracks

Barracks, hole in the ceiling

Mine near the bunker

Ammo box in front of the office

Duffle bag on the obstacle course