Fallout 3
“We're going to try to get into one of those Vaults. If that doesn't work, well... I have a backup plan. There's this secure bunker... another sort of vault... inside the National Guard depot, and... Look, no matter what it takes, the whole damn Keller family's gonna ride this storm out, but you've got to get your ass home. Now!”— Alex Keller

The National Guard depot is a pre-War military installation in 2277. It is located along the northern edge of Downtown D.C., and served as a National Guard compound.

Avoiding the metro system, it can be reached from the Wasteland. It is located directly south of Vault 108 and the robot repair center (which is directly north of Vault 108). One can also head east from Friendship Heights along the buildings past the Rock Creek caverns.

The depot itself has been severely damaged over the years. Many of the floors and ceilings have collapsed, making navigation difficult. However, despite the damage to the above-ground structure, the bunker (along with its incomplete extension), has managed to survive without much damage. 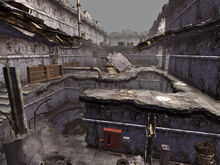 Once entering the building, there will be a stairway to the left that is accessible. Going up these steps, jump over the pipe and continue on into the office with the flag on the cubicle wall. Proceed past the cubicles and through the door at the north end of the room. Making a left, head down the stairs to the southwest. At this point, one should be able to see the utility door through the hole in the floor to the left. Continue east to the room with the Nuka-Cola vending machines. Next to the second vending machine and an Eat'o'tronic 3000 is the door to the depot training wing. 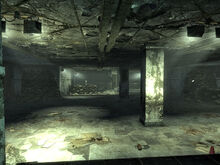 Heading east, go through one of the two holes in the wall. There is a hallway at the north end of the room. (The door to the east end of the hallway leads upstairs to the room with a Tales of a Junktown Jerky Vendor, a pre-War book, and a safe.) Follow the hallway west. Beyond the room with the low condition pre-war weapons and ammunition is the locker room. From there, go east to the training grounds. The door in the far southeast corner leads to a supply room with three ammunition boxes and four first aid boxes; past those is the door to the offices. 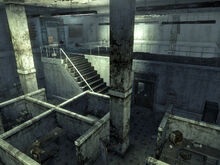 At the west end of the cubicle-filled area down the first staircase is a room with a turret control terminal. Go up either of the two staircases flanking the turret control room and enter the room to the south. Go beyond the desk and up the stairs. At the top of the stairs head west. On the counter is a Duck and Cover! In the far northwest corner of the room, there is some rubble that can be climbed to reach the next area.

The door at the top of the rubble has a sentry bot behind it and leads to the depot's upper floors. Once back in the depot, there is a room with a toppled vending machine and the switch to the utility door, which is in the southwest corner of the room.

The armory is only accessible after going through the National Guard training wing, the National Guard depot offices, and then exiting from the offices back to the first area of the National Guard depot. Exiting back into the depot, there is an electrical switch about 15 feet to the left. This will unlock the utility door two stories below, which in turn allows one entry into the armory. The utility door cannot be lockpicked, even though it is shown to have a Very Hard lock. There is a sentry bot inside the room just behind the door. Activating the second switch inside the utility room will open a trap door that leads into the armory itself. 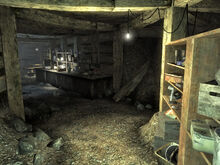 The National Guard bunker, accessed through the National Guard armory, can be opened by completing the unmarked quest Keller Family Refuge or via a relatively easy glitch (see relevant section). Inside the bunker is the experimental MIRV (and a plasma grenade hidden in a cooking pot, on the first set of shelves left-hand side). Also, five mini nukes and a U.S. Army: 30 Handy Flamethrower Recipes book can be found next to the MIRV, and a Nuka-Cola Quantum lies in a bin near the back.

Mr. Keller, a glowing one and last "surviving" member of the original Keller family, can be found here. Also, there are two first aid boxes and a .32 pistol with some ammunition next to the first aid boxes; it will be the first set of shelves you see in the middle of the room. There is also an ammunition box on the opposite shelves, and a safe with another .32 pistol, ammunition, caps and other random items, built into the desk where the workbench is.

The National Guard depot is mainly inhabited by sentry bots, Mister Gutsies, Protectrons, and robobrains. Mr. Keller (now a glowing one), can be found in the bunker containing the experimental MIRV (see above). 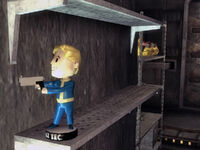 The National Guard depot appears only in Fallout 3.

The experimental MIRV with mini nukes and a U.S. Army: 30 Handy Flamethrower Recipes

The oversized Duck & Cover, compared to a normal-sized copy (left) in the offices

Bottlecap mine in the depot