“I've studied the plans to this place, so without me you're going to go in circles. What do you say?”— Sydney

The National Archives is a location in central Washington, D.C.

The building is relatively undamaged, but the documents and records have mostly been destroyed or ruined. It has also become home to super mutants, centaurs, and robots; one of which has a personality. The super mutants have placed many traps around to keep out unwanted visitors.

The National Archives is in the northeast part of The Mall. It's east of Museum of History and north of Museum of Technology (and their corresponding Museum station exits), across The Mall's battlefield.

Upon entering the building, there is a terminal mounted on the wall facing the rotunda labeled as National Archives Guess and Win! featuring a mini-game related to American history. The mini-game consists of eight questions. Answering all eight questions correctly awards an archives prize voucher, which may be redeemed at the prize redemption terminal mounted on the same wall. For promotional reasons, one's choice of prize involves three unique Mentats: Glamorously Grape, Brilliantly Berry, and Observantly Orange. Answering a question incorrectly will reset all questions, but one may reattempt with no penalty. When reattempting the mini-game, previously selected answers will appear highlighted. There are also six archives prize vouchers in an Average locked safe in the archives administrator's office.

Opposite the previously mentioned terminals is the rotunda. Sydney, a relic-hunter, will be waiting in the rotunda, surrounded by a lot of frag mines. She asks for help in fighting off a variety of super mutants, and to avoid the frag mines. Upon reaching her location, super mutants will spawn outside the rotunda, and begin their assault.

After the first group of super mutants is exterminated, another group will appear, possibly wielding miniguns or missile launchers. If Sydney is killed during the assault, one can loot Sydney's 10mm "Ultra" SMG, a unique 10mm submachine gun. One will also have to open the secret elevator manually by accessing Sydney's remote terminal nearby.

After the assault, the Lone Wanderer has the option to partner up with Sydney to find the Declaration of Independence. If selected, she will open the secret elevator, taking one directly to the archival secure wing east, or one may choose to open the secret elevator manually by accessing Sydney's remote terminal nearby. If one retrieves the Declaration of Independence without speaking with her, she will disappear and one will be unable to trade with her in Underworld. To keep Sydney alive, in hopes of obtaining her 10mm "Ultra" SMG, she can wait in the rotunda until one has successfully exterminated super mutants and sentry bots.

In the ladies' restroom on the ground floor of the west wing, a burned corpse is face-down in a toilet with a battery and wires attached to it. If one attempts to activate (drink) the toilet, the player character will be shocked and take 25 points of damage. One may retrieve 35 microfusion cells without taking any harm if one's Repair skill is 20 or higher. The trap itself is fitted inside the toilet tank; walk right up to the tank and activate the microfusion cells.

In the room with the door to the archival strongroom, there is a terminal that has been rigged with a grenade. The back is pried off and there is an antenna sticking out of the top. Several other traps exist in the vicinity, including explosives, swinging engines, battering rams, a swinging bull's head, grenade bouquets, and mines. 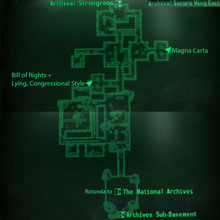 The National Archives appears only in Fallout 3. 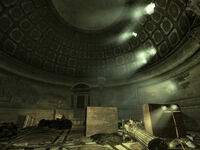 Another Duck and Cover!, in the basement