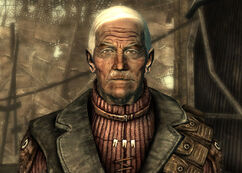 “You'll see. People think I'm just a crazy old man. Things will be different when the Enclave gets here.”

Nathaniel "Nathan" Vargas[1] is a resident of Megaton.

Nathan was born in 2212. He ran a caravan route for over 30 years with his wife, Manya. During that time, he became obsessed with the Enclave radio broadcasts. Since then, Nathan has become a fanatic, believing that the Enclave will bring salvation to the wasteland and is trying to convince everyone else in Megaton of this fact. Most of the residents write Nathan off as the local busybody, but all are quick to note that after 30 years on the back of a wagon, he is a considerably good shot.[1]

Nathan has an open tab at Moriarty's Saloon, which currently stands at 8 caps.

Manya Vargas is his wife.

He will ask the Lone Wanderer about their opinion of the Enclave. He will praise them if they say the Enclave is good; saying that the U.S. is a great country and "even if you were born in some underground Vault, you were born under the United States, which makes you an American."[2] If one says something bad about the Enclave, he will dislike them. However, he will like them again if they find him in Raven Rock.

Nathaniel Vargas appears only in Fallout 3.

Retrieved from "https://fallout.fandom.com/wiki/Nathaniel_Vargas?oldid=3230084"
Community content is available under CC-BY-SA unless otherwise noted.