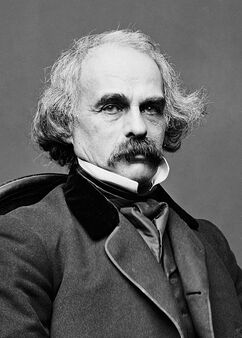 In 1819, he was sent back to Salem from his residence in Maine to attend school. There, he created a homemade newspaper known as The Spectator, which included poems, news, and other writings. He was sent to college in 1821, where he befriended future poet Henry Wadsworth Longfellow.

After his graduation, he was offered a job at the Boston Custom House, a building eventually replaced by the Custom House Tower in Boston. Hawthorne married Sophia Peabody in 1842 and moved to Concord, where they lived as neighbors to Ralph Waldo Emerson. After moving to Lenox in 1850, the couple moved back to Concord just two years later, where their neighbors included Emerson as well as Henry David Thoreau. Hawthorne continued writing, traveling with the founder of publishing company Ticknor and Fields to Washington D.C. at the start of the American Civil War. There, they met with Abraham Lincoln and other government members. Hawthorne passed away on May 19, 1864 at the age of sixty-three.

A plaque at the Old Corner Bookstore mentions that Ticknor and Fields published his works, and that he frequently visited the bookstore.

Nathaniel Hawthorne is mentioned only in Fallout 4.

Retrieved from "https://fallout.fandom.com/wiki/Nathaniel_Hawthorne?oldid=2853101"
Community content is available under CC-BY-SA unless otherwise noted.