Nate is a pre-War resident of Sanctuary Hills in 2077 and one of the two possible player characters available during character creation in Fallout 4. The player can customize his appearance and, if chosen as the player character, his name and SPECIAL stats.

Nate is a former soldier and decorated war hero who served in the 2nd Battalion, 108th Infantry Regiment of the U.S. Army during the Sino-American War. At some point before the war, he married Nora[2] and they had a son, Shaun in 2077. On the morning of October 23, 2077, Nate was preparing for an event at the Veteran's Hall in Concord[3] when a Vault-Tec representative visited the family to inform them that they have pre-approved admittance into Vault 111.

Mere moments later, a news bulletin warned the family of an imminent nuclear attack, which forced Nate, Nora and Shaun to rush to the vault, leaving their personal Mister Handy, Codsworth, behind.

After entering the vault, the family, along with the other admitted residents are placed in cryo-sleep by the Vault-Tec scientists, under the guise of decontamination prior to entering the main vault.

In 2227 he is disturbed from his cryogenic sleep by Conrad Kellogg and two unknown Institute scientists, whose intention was to acquire Shaun; as his DNA is the 'purest' source available to the Institute for their experiments.

Nate appears only in Fallout 4. 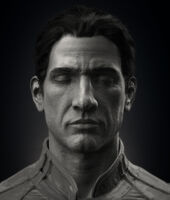 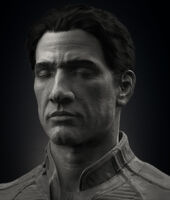 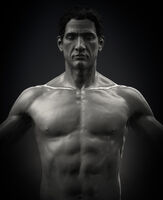 Nate in the wasteland