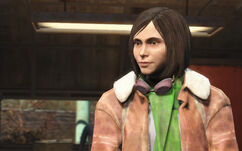 Natalie "Nat" Wright is the sister of Piper.

Nat is the sister of Piper and can be found inside Diamond City selling her sister's paper Publick Occurrences. If the Sole Survivor walks up to her she will give them the latest issue of Publick Occurrences. Nat used to live in a small settlement with her sister Piper, until her father was murdered and raiders threatened the town. Piper informed the settlement of the incoming attack, and the citizens were able to defend the town. When she and Piper saved up enough money, they moved to Diamond City to pursue journalism. Nat did not know her mother.

When having Piper as a companion and visiting Diamond City, Nat will sometimes run up to her and inform her of detentions.

Nat appears only in Fallout 4.

Sometimes, Nat's intro event will be triggered again, causing her to shout "Piper!" and then to begin running to where Piper is located on the map. She will begin running back to Diamond City if she encounters a hostile NPC during her travels.[verification overdue]

Concept art of Nat (named Gnat during development)
Add an image to this gallery
Retrieved from "https://fallout.fandom.com/wiki/Nat_Wright?oldid=2522371"
Community content is available under CC-BY-SA unless otherwise noted.