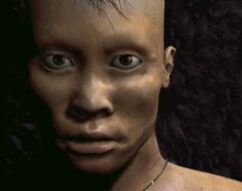 “Narg would like to prove his worthiness to lead the tribe and will let nothing stand in his way.”— Character selection description

Narg is one of three pre-made player characters available to be the Chosen One during character creation in Fallout 2.

Narg's exceptional physique has made him one of the best hunters in the tribe. Narg's first, and usually only, impulse is to crush anything that he can't figure out. Narg has become quite adept at crushing and slicing and dicing. Narg would like to prove his worthiness to lead the tribe and he'll let nothing stand in his way. Narg is a warrior by birth. A mighty constitution, great endurance and lightning-fast reflexes, as well as an excellent knowledge of the wasteland has made him one of the best hunters of the tribe. He has no fear left for the perils of long journeys, with spears and knives being his weapons of choice. Narg is young, fearless, and determined to prove his loyalty to Arroyo, no matter the cost.

Narg appears only in Fallout 2.

Retrieved from "https://fallout.fandom.com/wiki/Narg?oldid=3351993"
Community content is available under CC-BY-SA unless otherwise noted.