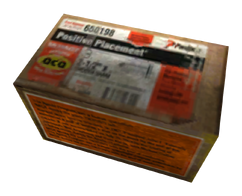 Nails are a type of ammunition in the Fallout: New Vegas add-on Lonesome Road.

A nail is a pin-shaped, sharp object of hard metal or alloy used as a fastener. This makes for a potentially deadly projectile when propelled at high speeds. Nail gun nails are generally mounted together in a strip or linked in a carrier and are stripped off the carrier at high velocities as they are propelled by the nail gun's actuator.

Nails can be crafted at a reloading bench. Crafting nails requires the following ingredients:

Flechettes were at one point planned but were cut from the final release. The player character would have received 90 flechette rounds in-game. The reference id code for Flechette rounds is xx00d5cf.

Nails in the collapsed overpass tunnel

Nails at the Courier's Mile