HairMessy02F
“What is this, a date? You start making a move, and it's stabbing time.”

Nadine is one of the inhabitants of Point Lookout in the year 2277.

Nadine is a wastelander who bartered passage to Point Lookout with Tobar and has not yet returned. Her mother makes a tearful plea for the Lone Wanderer to find her. Nadine is a bit of a tomboy and a restless adventurer with bright orange hair who wanted to explore beyond the Capital Wasteland, running away from home to stow away on the Duchess Gambit and see the world. She plans to return to the Capital Wasteland once she is found her fortune to bring back and share with her mother, Catherine, but she is not in a hurry to return quite yet.[Non-canon 1][clarification needed] She joined the tribals of Point Lookout at Ark & Dove cathedral while exploring.

She gives the key to finding Jackson and removes the Lone Wanderer's scar (which restores their hair and lets them wear hats again) after Walking with Spirits is completed. After she leaves the church, she can be seen on the Duchess Gambit, having exacted revenge on Tobar and claimed the ship as her own, and will take the Lone Wanderer back and forth from Point Lookout to the Capital Wasteland for free.

* Upon becoming captain of the Duchess Gambit, she will change clothes.

If the Lone Wanderer wishes to keep the scar from the brain surgery, they will have to pay Tobar for a ticket back and forth between Point Lookout and the Capital Wasteland. This is due to the fact that Nadine only takes control of the ship after removing the scar, due to the "Who cut open my head?" option only being available after inquiring about the scar removal.

Nadine appears only in the Fallout 3 add-on Point Lookout. 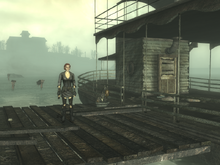 Nadine in the Pilgrim's Landing 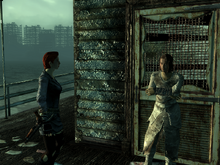