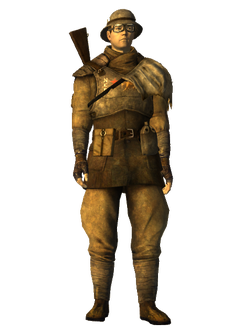 “When I got this assignment I was hoping there would be more gambling.”

NCR troopers are the main foot soldiers for the New California Republic Army in the Mojave Wasteland during 2281.

The NCR trooper is the backbone of the NCR's military might. Organized into the New California Republic Army, soldiers come from a variety of backgrounds and serve for a variety of reasons, and are majorly conscripted, with a minority volunteering for service. There is an equal gender ratio among troopers, with roughly 50% female soldiers and 50% male soldiers.[1][2][3][4] Their level of training, quality of equipment, and loyalty are just as varied, ranging from elite battalions equipped with high quality weapons, such as the one stationed at Hoover Dam, to rag-tag conscripts brought in every year to maintain the occupation of the Mojave Wasteland. Even among officers, the level of competence and dedication can vary wildly.

Most soldiers are located somewhere between these two extremes. They are well-trained professional soldiers who are capable of facing the worst the wasteland has to offer, ranging from petty warlords and their raider war bands to regimented, well-trained foes such as the Brotherhood of Steel and Caesar's Legion. In both cases, the NCR Army has proven to be more than a match for them, defeating the former in the NCR-Brotherhood War (through actions such as Operation: Sunburst) and the latter in the First Battle of Hoover Dam.

The standard NCR trooper's uniform is one of the several variants of NCR armor. Composed of a khaki tunic with bellowed hip pockets and khaki breeches, worn with a desert facewrap and hardened leather pauldrons, black leather fingerless gloves, arm wraps, brown boots and khaki puttees. The uniform was designed to resist the rigors of the desert and long campaigns.

The main protection is provided by a two-piece ballistic vest protecting the upper torso, mounted using leather straps and combined with a pair of reinforced shoulder protectors. Troopers are also issued steel combat helmets as standard, together with a pair of desert googles. Their armor is robust enough to withstand knife strikes and small-caliber firearms.

An average soldier in the NCR army is issued a service rifle and a 9mm pistol. Given its reliability, ease of manufacture and firepower, the service rifle is ideal for the grueling war in the Mojave. However, due to logistical troubles and supply shortages, not all troopers can be issued a service rifle, and instead, they must make do with whatever firearm is available. As a result, small NCR patrols can fairly often be found wandering the wasteland armed with 10mm submachine guns, 9mm submachine guns, 10mm pistols, 9mm pistols and even single shotguns. A few such patrols use First Sergeant Astor's camp near Camp Searchlight as a resting point.

An NCR trooper called "NCR trooper MP" may randomly approach you in the Strip and attack you which also causes everybody in that area to turn hostile, claiming that no-one messes with the NCR and gets away with it, even if you have a good reputation with the NCR and have done nothing to antagonize them. Stealing from the embassy, even if you do it without getting caught, seems to attract his attention, but not always. Triggering the quest Don't Tread on the Bear! also seems to draw his ire, even if you haven't actually failed it. Killing him out of sight of others will prevent anyone else from turning hostile against you, but you may still receive Infamy with the NCR. It can be somewhat more problematic if he appears in a crowded area, you can bypass him to avoid having a fight with him.[verified]

An NCR trooper at Hoover Dam in the opening scene of Fallout: New Vegas

Disguised NCR troopers in Freeside during G.I. Blues
Add a photo to this gallery

Retrieved from "https://fallout.fandom.com/wiki/NCR_trooper?oldid=3366071"
Community content is available under CC-BY-SA unless otherwise noted.
... more about "NCR trooper"
RDF feed
Has platform
PC +  and Xbox 360 +