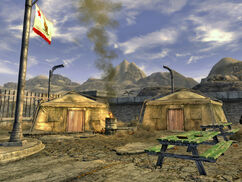 “You should talk to Lieutenant Hayes. He's in a tent down the road. Just stay on the west side of the overpass if you don't want to get shot.”— Unnamed NCR trooper guarding Primm

The NCR tents are two tents to the westside of Primm in the Mojave Wasteland in 2281. One of them has Lieutenant Hayes and an NCR trooper in it, the other one can be occupied by Sergeant McGee.

Hayes' tent has some mattresses to two sides on which the Courier can freely sleep. McGee's tent has three bedrolls and some shelves with ammunition boxes on them. 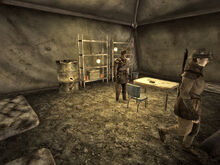 Hayes' tent from the inside
Add an image to this gallery
Retrieved from "https://fallout.fandom.com/wiki/NCR_tent?oldid=2750717"
Community content is available under CC-BY-SA unless otherwise noted.