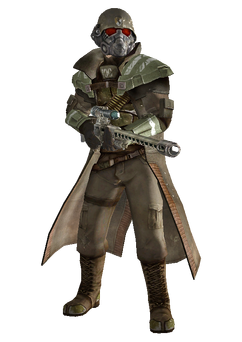 NCR riot control are dead NCR Veteran Rangers in the Divide in 2281.

NCR riot control were NCR Veteran Rangers stationed at the Divide during the annexation by the NCR of the prosperous community of the Divide, acting as riot control. They used the former 11th Armored Cavalry Regiment riot armor only located there, which is a more advanced model of the riot armor used in NCR Ranger combat armor and the riot gear used by standard pre-War riot officers in the Divide. Riot control officers and the 11th Armored Cavalry Regiment convened there when the entire local hippie commune protested against the ongoing Sino-American War.

The satchel charge near the riot officer in The Crow's Nest can cause him to fly through the window into the crevice, making the advanced riot gear unobtainable unless one uses console commands or leaves the Divide, returns and fast travels to the Crow's Nest.

Ranger wearing the Elite riot gear at Third Street Municipal Building
Add an image to this gallery
Retrieved from "https://fallout.fandom.com/wiki/NCR_riot_control?oldid=3214194"
Community content is available under CC-BY-SA unless otherwise noted.