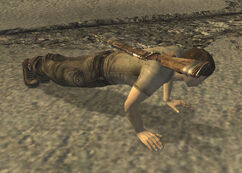 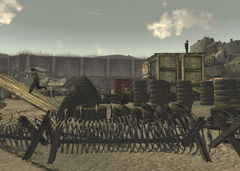 The recruits running the obstacle course while shouted at by the drill instructor.

NCR recruits are two recruits who were included in the retail version of Fallout: New Vegas, supposed to be training at Camp McCarran. However, they were removed at some stage of patching the game.[1]

The NCR recruits were to be trained to become NCR troopers. Their trainer is the drill sergeant who was also cut from the game. According to their dialogue, it is apparent that they are unhappy with their drill sergeant.

The NCR recruits were cut from Fallout: New Vegas.

Retrieved from "https://fallout.fandom.com/wiki/NCR_recruit?oldid=3242648"
Community content is available under CC-BY-SA unless otherwise noted.