“...The usual. Troopers getting drunk and causing problems. Like that's a surprise to anyone. Hell, I plan on getting drunk once I'm done with my shift. Maybe even head over to Gomorrah for a good time.”

NCR military police are equipped exclusively with cattle prods, and can see through disguises. Their jurisdiction includes internal affairs and intelligence, as well as guarding important NCR figure-heads. Lieutenant Carrie Boyd is a leading member of the NCR military police.

The NCR military police found guarding the NCR Embassy are marginally stronger than those patrolling the New Vegas Strip, and also are trained in unarmed combat. The military police at the embassy drop NCR dogtags when killed, unlike their counterparts.

A few of the NCR military police will either attack the Courier or make him/her give them 200 caps, depending on if you encounter them on the Strip or in the Wasteland. This only happens if the Courier has a bad reputation with the NCR. If the Courier kills them, he/she will still gain NCR infamy, along with turning other NCR soldiers and citizens around him/her hostile. 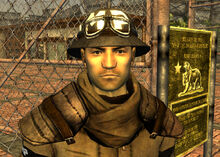 The MP guarding the NCR Embassy