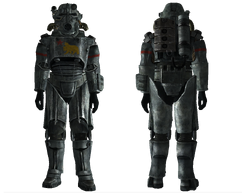 “They have the best equipment the NCR can get its hands on, power armor salvaged from our war with the Brotherhood. Techs strip out the joint servos so you don't need special training to wear it. It feels like you're carrying a brahmin on your back, but it can take a heck of a lot of punishment.”— Chief Hanlon

NCR heavy troopers are the personal heavy shocktroopers of General Lee Oliver, and serve as the heavy infantry of the NCR army in the Mojave Wasteland during 2281.

Clad in NCR salvaged power armor and armed with heavy weaponry, these elite troopers are some of the deadliest soldiers the NCR has at their disposal, second only to the Veteran Rangers of the NCR Rangers. General Lee Oliver has very high faith in his shock-troopers, and seems almost oblivious to how ineffective the power armor makes them in close quarters. Under General Oliver's command, Rangers are regularly thrown to the sidelines or used as cannon fodder in favor of the heavy troopers, to the point that Ranger Chief Hanlon is actively subverting NCR Intelligence out of spite.

NCR heavy troopers begin to appear after the player either activates or destroys the securitron army in Mr. House's secret bunker underneath The Fort, or when the PC reaches a medium-high level. They are usually stationed in pairs. Generally, heavy troopers do not respawn if killed.

Retrieved from "https://fallout.fandom.com/wiki/NCR_heavy_trooper?oldid=3171804"
Community content is available under CC-BY-SA unless otherwise noted.