NCR dollars are the standard currency of the New California Republic and referred to as money in Fallout 2.

The NCR introduced its own money around the turn of the 22nd century, initially relying on coins minted from gold.[citation needed] By 2241, the economy of NCR dominated the West Coast and coins became universal currency, used by the three regional powers: NCR, Vault City and New Reno.[citation needed] During this time bottle caps had become worthless in these regions.[1][Non-canon 1]

By 2281, the NCR dollar is valued at about 40% of a water-backed cap[2] and only 10% of a silver Legion Denarius.[citation needed] In the Mojave Wasteland, these notes can be seen in the $5, $20, and $100 denominations. The notes are issued by the Republic Reserve Bank located in Angel's Boneyard. The Treasurer of the Republic is John Michael Henderson. Their signature can be seen on the front of all NCR notes found in the Mojave Wasteland.

$5 appears as a paper bill similar to a US $5 bill. It features a picture of Aradesh on the face of the bill and a landscape image of the Shady Sands on the back.

$20 appears as a paper bill similar to a US $20 bill. It features a picture of First Ranger Seth on the face of the bill and two pieces of New California Ranger insignias on the back.

$100 appears as a paper bill similar to a US $100 bill. It features a picture of President Tandi on the face of the bill and an image of Tandi addressing a crowd on the back. 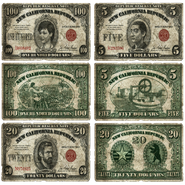