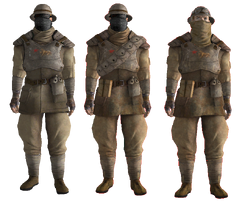 NCR armor is the official uniform of the New California Republic Army.

As of 2281, the official combat uniform consists of a khaki field jacket with bellowed hip pockets and khaki breeches, worn with a desert face wrap, black leather fingerless gloves, arm wraps, brown combat boots, and khaki gaiters. An armored breastplate emblazoned with the emblem of the NCR is worn in combat environments, attached via leather straps and buckles.

It provides a poor level of protection (DT of 10) for its weight of 26 pounds; however, with the Jury Rigging perk, it is possible to use it to fix much more advanced and expensive medium armors.

NCR trooper armor is worn by NCR troopers. All the other outfits are a variant of this.

Joshua Sawyer and Brian Menze came up with the design of the NCR armor's World War I-style helmets.[1] 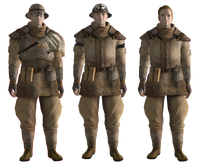 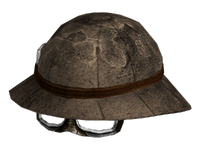