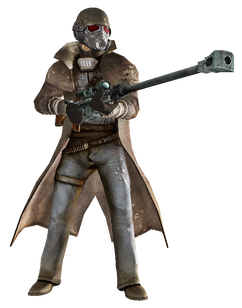 The NCR Veteran Rangers are elite Rangers in the NCR Army. They wear the NCR Ranger combat armor, commonly referred to as "Black Armor." They are renowned for their survival and combat prowess.

Veteran Rangers are an elite sect of New California Republic Rangers who have served long enough and with such distinction that they have earned the privilege of wearing the distinctive NCR Ranger combat armor, considered to be one of the most valuable and awe-inspiring items in the entire New California Republic. The inscription on their signature Ranger Sequoia pistols indicates that the Veteran Rangers carrying them have served in the Rangers for 20 years or more.

Veteran Rangers have a legendary reputation amongst the people of the NCR and their enemies. NCR troopers will often comment on their reputation for toughness, and even General Oliver's elite NCR heavy troopers admit to being intimidated by them. Members of the Fiends inside Vault 3 advise the Courier to run the other way if they see a Ranger in black armor, remarking that they are capable of picking off entire Fiend patrols from more than a quarter of a mile away. If the Courier kills Ranger Stella in the arena, some Legionaries will remark not thinking anybody could kill a Ranger in single combat.

Veteran Rangers can be found at most major NCR military outposts after the player activates or destroys the Securitron army in Mr. House's secret bunker underneath Fortification Hill. Alternatively, they may spawn after completing the mission Kings' Gambit. They appear at Camp Golf, Camp Forlorn Hope, and any of the Ranger Stations in the Mojave.

If the Courier is declared a terrorist by the NCR, a group of NCR Rangers will be dispatched to hunt down and kill them. After the most recent patch, this group will include Veteran Rangers at higher levels. Similar to the Legionary assassins, various bugs currently prevent this encounter from happening more than once, if at all.

The Courier hears about the Veteran Rangers throughout the game, with increasing knowledge of the NCR Veteran Rangers as the story reaches its end. Rangers finally appear themselves in the few quests just before the Second Battle of Hoover Dam. 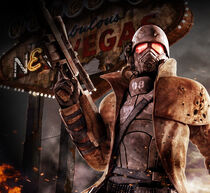 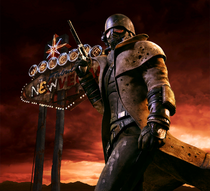 The Veteran Ranger as seen on the cover of Fallout: New Vegas wielding a .357 magnum revolver with long barrel 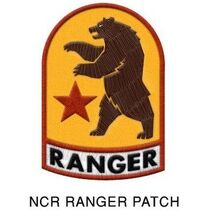 The patch of the NCR Rangers
Add an image to this gallery
Retrieved from "https://fallout.fandom.com/wiki/NCR_Veteran_Ranger?oldid=2474135"
Community content is available under CC-BY-SA unless otherwise noted.