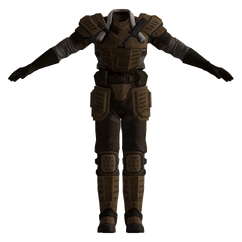 The NCR Ranger patrol armor is a piece of armor in Fallout: New Vegas.

This armor provides the same level of protection as combat armor, but has a higher item HP, meaning it will degrade slower. It can typically be found earlier in the game than combat armor but repairs will be an issue without Jury Rigging or actively killing NCR Rangers and looting their armor. Alternatively, due to the armor's very low value, merchant repair is a viable choice.

If the player character is in good enough standing with the NCR, they will receive an NCR emergency radio and be able to call in an NCR Ranger to aid them in combat. If this Ranger dies, their armor may be looted without impacting one's relationship with the NCR.

It can also be repaired by non-player characters, and is substantially cheaper to repair than normal combat armor. The armor also has a black ceramic combat knife holstered on the left chest plate which is unusable by both the Courier and non-player characters. As stated in the concept art picture, there is a 'water backpack' in the back of the armor, obviously to protect and store water. This is only a cosmetic feature and cannot be used. The ranger patrol armor is hand-manufactured in the NCR.