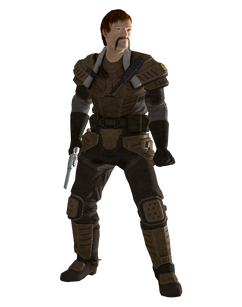 Don't Tread on the Bear!

“See, the NCR sends us when they want terrible things done to terrible people.”— NCR Ranger

NCR Ranger hit squads operate in the Mojave Wasteland, under orders from the New California Republic in 2281.

Should the Courier gain a bad reputation with the NCR, through violence, theft, or by aiding the Republic's enemies, Rangers will be dispatched to deal with the situation.

The first encounter will be non-hostile, with the Rangers instead giving the Courier an ultimatum and three days to improve their standing. If this warning is ignored, on their next appearance the Rangers will shoot on sight.

NCR hit squads usually consist of four Rangers, whose equipment is dependent on the Courier's level. They appear at various locations in the wasteland, from where they will move towards the Courier, fighting any other enemies they encounter on the way.

Retrieved from "https://fallout.fandom.com/wiki/NCR_Ranger_hit_squad?oldid=3107836"
Community content is available under CC-BY-SA unless otherwise noted.