The building consists of three main areas, including an office, jail cells, and a storage room. The storage room contains a selection of guns, ammunition, and armor. It is behind a Hard locked door or the key can be pickpocketed from Marie Pappas in the embassy building.

If the Courier is detected while picking this lock, it will cause MPs to attack, as well as reduce Karma and reputation with the NCR. If the Courier's status with the NCR is high enough, the MPs will not react with hostility to the lockpick attempt.

At least one of the jailed gamblers has a key to the cell. 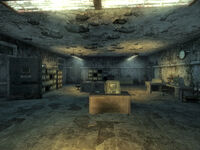 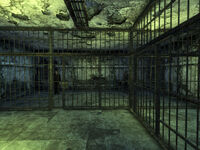