I Fought the Law
My Kind of Town
Eddie's Emissary

The New California Republic Correctional Facility (commonly abbreviated to NCR Correctional Facility or NCRCF) and known before the war as the Jean Conservancy,[Non-canon 1] was an NCR prison located southeast of Goodsprings that currently acts as the main settlement of the Powder Gangers and a staging point for raiding the local area in 2281.

Once a high-security prison of the Republic, the facility became a fortified stronghold of the Powder Gangers, monitored by Brotherhood and NCR scouts alike.[1][2] The Powder Gangers became a scourge on the inhabitants of the region, attacking caravans along I-15 and stealing supplies from settlers and workers. Their biggest raid occurred on Sloan, where they stole an entire cache of dynamite used by the workers to mine Quarry Junction.[3] This led to deathclaws settling into the quarry and plaguing the northern reaches of Long 15, shutting down caravan traffic to New Vegas.[4]

Before the Great War, the NCR Correctional Facility was the Jean Conservancy, a low-security all-female state prison.[Non-canon 1][5] When the NCR occupied the Mojave, it was commandeered to house prisoners on a work-release program.[Non-canon 1][6] The inmates were tasked with maintaining a railroad alongside the Long 15 under military supervision, keeping the vital link between the Boneyard and New Vegas alive.[Non-canon 1] However, as the war with the Legion escalated, more and more prison guards were redeployed to the Colorado River despite the warden's objections.[Non-canon 1] Given the fact that the convicts working on the railroads were provided with high explosives in their work and were predominantly violent criminals jailed for serious crimes, this created ripe conditions for a prison break.[Non-canon 1][7]

Under the lead of Samuel Cooke, a small group of inmates gathered weapons and explosives before rebelling against the NCR staffing the facility.[Non-canon 1] Blasting their way out of the cellblock, they quickly overwhelmed what little NCR personnel was present at the site, killed the warden, and established their own rule.[Non-canon 1] The prisoner population dispersed, with some following Cooke into Vault 19, and others staying with Eddie as Powder Gangers, and established camps around the correction facility.[Non-canon 1] Some embarked further south to cause mayhem along the I-15.[Non-canon 1][7][Non-canon 2]

The prison has one main entrance, which is guarded by a Powder Ganger named Dawes. Snipers form an effective perimeter around the facility. Whether or not the Courier has provoked Powder Gangers elsewhere, the Powder Gangers here are not hostile unless the player character has established a negative reputation with the faction overall. Should the player character approach Dawes in disguise, he will notice that they are not an actual Powder Ganger and tell them so. However, he will continue in casual dialogue as long as one has a good reputation with the gang. He can unlock the door for a price of 100 caps. It is possible to pickpocket the key from him to avoid the fee. Unlike other items in his inventory, pickpocketing the key will never fail as long as the player character is hidden.

Two additional entrances are opened during the New California Republic assault at the end of the Powder Gangers' questline. One such gap in the fence is situated between the lookout tower and the visitors center and the other is located almost directly opposite it, along the eastern fence.

It is also possible to position the player character on the cliff at the southeast side of the facility and perform a running jump over the fence to avoid the entrance fee. Similar to this, one can "sit" in one of the outhouses in the southwest corner from outside the fence, effectively teleporting them inside the facility. In both of these cases, the entrance remains locked from the inside, however. To exit the facility one must jump over the fence again using the guard tower stairs, use fast travel, or pickpocket the key from Dawes through the fence.

Upon entering the facility through the front door, one will find themself in the visitor's center, a lounge-like area with tables, a desk, a first-aid box and a counter with a broken terminal on it. There is also a fridge, a Sunset Sarsaparilla vending machine, and a Nuka-Cola vending machine. A Powder Ganger wearing a guard uniform stands by the door. During the same scenario as above, it is confirmed that he will propose a truce, in which the player character stays away from the gang outposts and the gang leaves them alone. However, after hearing his offer, choosing to ignore it will not provoke any altercation.

There will be a man sitting at one of the tables named Meyers, who can play a part in the My Kind of Town questline. He is a mild-mannered ex-sheriff who will engage in conversation with the player character. He is not a Powder Ganger and says he is only staying there to serve out his sentence out of respect to the NCR. Since he is not part of the Powder Ganger faction, he will not attack even if the Powder Gangers in the room become hostile.

Through the back door of the visitor's center, the player character can enter the main prison yard. A workbench can be found near the door along with an owned crate of explosives. Several Powder Gangers mill about the yard, and several are posted at the tops of the towers. Five of the six towers have Powder Gangers posted at the top, and each contains minor stealable loot, consisting of mostly ammunition and healing items. There are upwards of 40 empty whiskey bottles lying around in the prison yard.

There are two cellblocks located within the courtyard. Cell block A contains two Powder Gangers and a few locked containers of explosives and uniforms. In cell block B, the Courier can find Carter, a small-time trader, who has set up shop in the cell block. He sells chems and a few odds and ends. A locked cell contains his "stash," consisting of bottle caps in an ammo container.

Eddie, the leader of the remaining Powder Gangers, has set up his headquarters in the administration building. Speaking to him will initiate the I Fought the Law quest. Scrambler, Hannigan, and four unnamed Powder Gangers can be found in this building as well.

Eddie holds the key to the Average locked room, which contains a substantial stash of ammunition and explosives. One of the boxes always produces a random skill magazine. The unlocked room next door has a copy of Lying, Congressional Style on the desk. 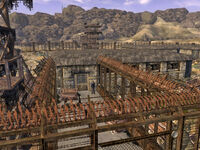 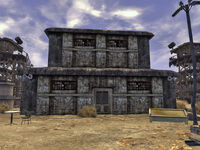 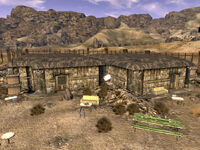 One of the many mining car collections found in the facility

The water source, surrounded by buckets

One of the campfires

Guard tower on the southwest 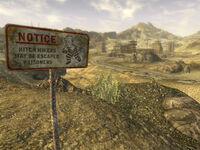 Defaced painting of President Kimball in the warden's office 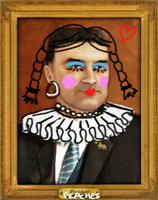 Close-up of the defaced painting 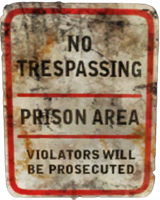 State prison sign before the turn off to the NCRCF 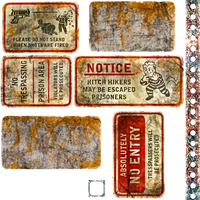