Get the map from the NCR Rangers, for Vortis the slaver
Free the slaves in the slave pen, for the Rangers

The NCR Bazaar is a section of New California Republic in 2241.

The Bazaar is located right outside the walls of NCR, the capital of the emerging nation. Various merchants can be found there, including a weapons dealer, a bar, the iguana stand and even the slavers managed to set up shop here due to a loop hole in the Republic's laws. The Bazaar is officially outside the city limits of the NCR's capital and therefore the laws are much less strict in this area and weapons can be carried openly. The presence of law enforcement and military in this area is minimum compared to the rest of the town. Many merchants choose to operate in this area instead of the actual town itself to avoid the strict rules and law of the Republic, but still enjoys its protection.

The NCR Bazaar appears only in Fallout 2.

With the roofs removed 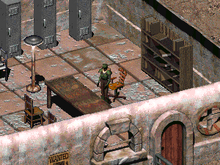 Location in the 1998 press pack
Русский
Community content is available under CC-BY-SA unless otherwise noted.
Advertisement