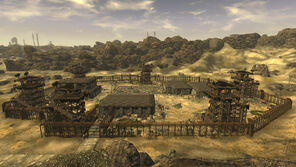 The NCRCF prison break,[2] or NCR Correctional Facility uprising, was a revolt made by the convicts held at the NCR Correctional Facility against the NCR Army troopers who were stationed there to guard them. After the uprising, the convicts fragmented, with some taking over the Bison Steve Hotel in Primm, a larger group moving into Vault 19 to wage an insurgency against the NCR, while many remained at the correctional facility.

When the NCR expanded eastward into Nevada they took over the pre-War Jean Conservancy facility in Jean and established the NCR Correctional Facility.[3] The facility is located near train tracks that run parallel to I-15 and the convicts were used to maintain and expand them. According to the Powder Gangers, no correcting was done - only manual labor.[4] So when the majority of NCR troops guarding the facility were called away to patrol the Colorado River, the convicts decided to take matters into their own hands. Samuel Cooke, an experienced anti-NCR revolutionary,[5] along with some trusted inmates, secreted small amounts of blasting powder used for railroad work and other makeshift weapons.[6]

When General Lee Oliver requisitioned another group of guards for garrisoning along the Colorado River, Cooke saw an opening to break out and took it. Cooke and his men blasted their way out of their cell block, overwhelmed the warden and remaining guards, killing them all and taking back their freedom. The rest of the convicts joined in when they realized what was happening.[3] Guards who didn't manage to escape the prison in time were killed, while the inmates organized themselves and began ransacking the area.[7]

After the fighting had stopped, the convicts had taken control of the NCRCF and killed the warden and almost all its guards. However, the group was split on what to do next, some under the leadership of Eddie wanted to stay and control the prison themselves, others under Samuel Cooke's leadership wanted to leave NCRCF and some just wanted to leave. The groups eventually all split, with Cooke and his group traveling into the Mojave[8] (eventually ending up at Vault 19) to wage a small war on the NCR, those under the leadership of Eddie[9] started to raid the local areas around NCRCF and dubbed themselves the Powder Gangers and a smaller group of disorganized convicts left to terrorize the surrounding areas and recently took up residence in the town of Primm.[3]

The speed at which Eddie was able to establish control over the gangers in the wake of Cooke's departure surprised the NCR, which, combined with typical Republic bureaucratic red tape, rendered it unable to organize an effective response for months. By the time the Courier comes to at Doc Mitchell's house, the Gangers rapidly became the largest organized group of highwaymen west of the McCullough mountains making their stretch of the I-15 treacherous to caravaners and citizens alike.[10]

The Powder Gangers were also quick to bolster their supply of weapons and explosives, raiding nearby Sloan for its supply of dynamite. Because of the raid and subsequent lack of dynamite, the quarry workers were unable to work and had to wait for NCR reinforcements. This left Quarry Junction unattended as a pack of deathclaws would make their nest further complicating matters and effectively shutting down the I-15 to Vegas because of both Powder Ganger raiding parties and deathclaws.[11]

Because of the imminent threat of gangs of prisoners coming down onto Primm, Samuel and Michelle Kerr left and founded the 188 Trading Post at the interchange of Highway 95 and 93 in September when the prison break occurred. A month later, the 188 is a prosperous hub of commerce because of I-95 being the only safe route to New Vegas.[12][13][12]