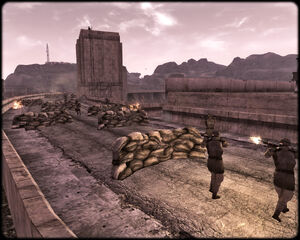 As the NCR started to expand into the Mojave Wasteland, Caesar decided to add the NCR as another notch to the Legion's belt and conquer the area for himself.

In 2277, the Legion entered the Mojave to take the area. To their surprise, the NCR had already taken a hold of the area six years earlier. Angry at the invasion of the area by the "profligates'", Caesar readied the Legion to destroy the NCR and conquer the Mojave.

Shortly before the First Battle of Hoover Dam in 2277, Caesar's Legion committed a significant force to capture the independent towns of Ashton and Hopeville in New California, recognizing that the area was a major supply line for the NCR's efforts. The NCR contested the Legion's control, being in the process of annexing the area themselves, and a confrontation ensued.[3] The result was the Siege of Hopeville and Ashton. The NCR and Legion forces at the siege were very well-equipped,[4] with a disproportionate number of special forces present.[5]

While this was occurring, the Courier carried a package from Navarro by order of the NCR, with neither the Courier nor the NCR government being aware of the package's nature. The package actually contained a detonator. When this device was close enough, it remote linked with the ICBM computers, sending a signal to the dormant nuclear missiles lying in the silos beneath the ground. They then began detonating one after another, splitting the earth, cracking and twisting the landscape, causing massive earthquakes. The disaster created the newly named Divide: a wind-beaten maze of twisting canyons, skin-flaying dust storms and horrific abominations.

The detonation had huge effects on the war in the Mojave. Firstly, both the NCR and the Legion suffered horrific casualties, with entire companies of NCR soldiers being killed outright,[6] Legion deaths being of a presumably similar scale, and the many survivors being transformed into Marked men. Secondly, and more importantly, the Divide was rendered impassable, greatly hindering the NCR's logistics. They were not able to properly capitalize on their victory at Hoover Dam, with former Legion Legate Joshua Graham crediting this event with the Legion being able to survive past the battle.[7]

Establishing their main Mojave base at Fortification Hill, Caesar ordered the Malpais Legate to storm Hoover Dam in a battle that would be known as the First Battle of Hoover Dam. The NCR fended off the attack well, but they could not afford the Legion to set up positions near the Dam. Therefore, NCR sharpshooters targeted the officers. Without them, the younger legionaries were confused and charged blindly into Boulder City after the NCR army. When the Legion stormed the city they were unaware that the NCR had rigged explosives and C4 across the entire town. When the NCR detonated the explosives it killed a large portion of the Legion's force. The NCR then mopped up what was left of the attacking forces, taking only 107 losses themselves.

Caesar was furious at Malpais' humiliating defeat at the Dam. At the Grand Canyon, he ordered his men to cover Malpais with pitch, burn him alive, and toss his flaming body into the canyon. He then bestowed the rank of Legate on Lanius.

From then on, the Legion kept to themselves on the other side of the Colorado River, although occasionally popping over the other side to establish camps and bases, and raiding NCR bases. In 2281, they opened the radioactive waste containers from San Onofre in the firehouse within Camp Searchlight, and established the Cottonwood Cove outpost, and raiding bases such as Ranger station Charlie, and the towns of Nipton and Nelson. They also sent spies into the New Vegas Strip. They secretly plotted the second invasion of the Dam at The Fort. As they had recovered in numbers, Caesar ordered his forces to expel the NCR from the east side of the river in what would be known as the Battle of Willow Beach and the Battle of Arizona Spillway, in both the Legion would be successful.

The tactical situation with the NCR, after this, is not good due to their various issues involving the Great Khans and the Powder Gangers. Despite this, they hold various offices in New Vegas and the Mojave Outpost.

The Legion currently have control of Camp Nelson, the Techatticup mine, Legate Lanius' camp, the Legion Raid Camp, and Nipton. The area around Camp Forlorn Hope is also heavy with Legion activity.

When the Courier entered the Lucky 38, it gained either Vulpes Inculta or Alerio's attention. He informed Caesar, who then asked him to extend an invitation to the Courier. When the Courier arrived, Caesar ordered them to enter the underground bunker and destroy it, and execute Robert House. If the Courier accepts this, they will be asked to receive alliances from factions such as the Boomers, the White Glove Society and the Omertas. The outcome of the alliance missions is unknown.

Ambassador Crocker noted the Courier's entry into the Lucky 38. He invites them over and asks them to work for him. When the Courier arrived, Crocker asked them to receive alliances from the Boomers and ease the tension between NCR and the Kings. It is unknown if the alliance missions were successful. Colonel Moore asks the Courier to gain the support of the Great Khans or destroy them, then destroy the Brotherhood of Steel, but a truce can be signed as well (player choice). They then required assistance protecting Kimball during the visit (player choice).

The Mojave Campaign ends with the Second Battle of Hoover Dam, and the outcome of said campaign ultimately depends on the side championed by the Courier. If NCR is supported, it secures Hoover Dam, all major Mojave territories (including the Strip and excluding Freeside), and Fortification Hill. If Caesar's Legion is supported, it conquers Hoover Dam and the entire Mojave Region up to the Mojave Outpost. Both sides make plans to continue the war and entirely conquer the other faction completely once the Mojave Campaign is over.

Alternatively, the war is brought to an abrupt halt if the Courier either supports Mr. House or works with Yes Man to take over the Mojave for their own use. The NCR initially defeats Caesar's Legion at Hoover Dam while Mr. House's Securitron army destroys Fortification Hill. After this, the Securitron army ejects all NCR military presence from the region, the violence of this forced withdrawal depending on the Courier's negotiation with General Oliver. Now physically separated from each other by the independent New Vegas, and the Legion on the way to collapse due to the death of Caesar, who was at Fortification Hill at the time, the four-year conflict is abruptly ended.

Retrieved from "https://fallout.fandom.com/wiki/NCR-Legion_War?oldid=3143289"
Community content is available under CC-BY-SA unless otherwise noted.