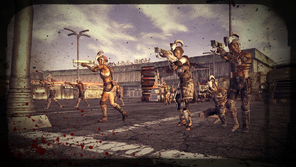 Determined by the Courier's actions

“If it's bad news, you can take it up with the colonel. If it's good news, it better involve some dead Fiends.”— Major Dhatri

The NCR-Fiends War is a war led by the NCR against the various drug-crazed raiders of the Mojave Wasteland, known as Fiends. The conflict began when NCR president Wendell Peterson ordered the Army into the Mojave, marking the beginning of NCR expansion.

The NCR faces difficulty fighting the raiders in the Mojave Wasteland, contrary to the situation in New California. With the Vipers and Jackals scattered and the conflict with the Great Khans over, the Fiends are of the highest concern to the NCR. The first group of raiders encountered by the NCR in the Mojave, the Fiends made themselves known when they murdered 38 NCR citizens. A mild response to the massacre resulted in Joanna Tibbett being voted out of office as NCR president and her replacement by Wendell Peterson.

Although Peterson deployed several battalions in the Mojave, the Fiends simply grew more determined to drive out the Republic. Although the Fiends utilize similar guerrilla tactics as other raiders, they are more sophisticated and organized. Their threat further escalated when the Fiends took Vault 3 to gain both a heavily fortified base of operations and a large stash of energy weapons. Raids on Camp McCarran and Westside are a constant concern for NCR citizenry. The situation has only worsened with the Fiends forging an unofficial alliance with the Legion, who have been supplying them with intelligence on the NCR's supply movements and troop deployments.

By 2281, raids by the Fiends on NCR territory have resulted in increased security in places such as NCR Sharecropper Farms, Westside, and Camp McCarran. The main leaders of the Fiends have been targeted for death by Major Dhatri.

Retrieved from "https://fallout.fandom.com/wiki/NCR-Fiends_War?oldid=3155737"
Community content is available under CC-BY-SA unless otherwise noted.