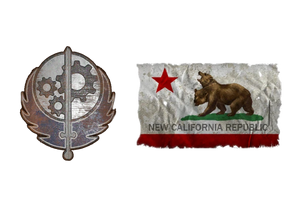 The Brotherhood of Steel emblem (left) and NCR flag (right)

“Due to disagreements over how technology should be controlled in the wasteland, the Brotherhood of Steel waged a long and bloody war against the NCR. Despite superior equipment and training, the Brotherhood went into retreat.”— Fallout: New Vegas loading screen

The roots of the war lie in the decline of the Brotherhood of Steel between the eldership of Rhombus and the emergence of the New California Republic as the dominant power in New California.[7] Confronted with an expanding nation state, the Brotherhood adopted a reactionary policy, attempting to seize any advanced pre-War technology, limiting and controlling access to such technologies throughout the region, particularly energy weapons.[8]

The Republic refused to accept the policy the Brotherhood attempted to impose on it, which resulted in a military confrontation.[3] Although the NCR tolerated Brotherhood presence as late as 2241,[9] by the late 2250s or early 2260s, military clashes between the republic and the Brotherhood were already commonplace and consuming lives.[1]

Course of the war

This gave way to a long and bloody war that took a considerable toll on the NCR Army and the Republic itself as well as the Brotherhood. During the early years of the war, the Brotherhood was able to inflict heavy losses on the NCR, achieving numerous victories and successes in the opening stages of the conflict. However, despite enjoying a huge advantage in individual training and equipment, the Brotherhood was unable to match the New California Republic's manpower and ability to replace losses, and the tactical and strategic flexibility it provided. Eventually, the Brotherhood was forced into retreat and hiding.[3] At least six chapter bunkers were wiped out by the Republic, four destroyed by the Brotherhood in a last-ditch attempt to deny them to the NCR.[4]

Although hostilities continued in New California,[10] the Republic recovered and focused its efforts on expanding eastwards, into the Mojave Wasteland and Hoover Dam. Elder Lyons mentions turmoil, in that "the Brotherhood of Steel has been struggling for years, both here and back home." The subsequent occupation of the Dam in 2273 brought it in conflict with the Mojave chapter of the Brotherhood, which operated unrestricted in the region for years. After two years of guerrilla skirmishes instigated by the Brotherhood, the NCR launched Operation: Sunburst to neutralize the chapter in a single, pitched battle at HELIOS One. The indefensible nature of the solar power plant, inexperienced soldiers, limited manpower, and poor tactical decisions made by Elder Elijah were ruthlessly exploited by the republic and its commanders. Concentrating a force that outnumbered the Brotherhood defense by a factor of between 15[11] and 20 to 1,[12] the Operation was a tremendous success. The Brotherhood was routed, losing half its manpower, including over a half of its veteran knights and paladins. The survivors retreated to Hidden Valley through the McCullough Mountains and enacted a strict lockdown.[Non-game 1] As they hid, the republic increased its military presence in the Mojave fivefold.[13]

Operation: Sunburst, a pitched battle where the Mojave chapter lost control of HELIOS One and suffered crippling casualties amounting to half the chapter.

Hostilities continue in New California as of 2281,[10] although it is no longer considered a priority conflict for the NCR. After years of warfare and attrition, the Brotherhood has been forced into hiding and retreated into their bunkers. Veteran commanders of the Brotherhood War have been reassigned to other fronts, with the most prominent of those being Colonel Cassandra Moore, with four tours to her name, a legendary status among the troops, and tasked with effecting the annexation of the Mojave through any means necessary.[14] Victory came at a significant cost in men and materiel, especially during bunker assaults, when platoons of troops were lost to eliminate a stronghold.[15]

Meanwhile, the Brotherhood in the West is dying out, effectively in hiding,[5] with some of its most talented members going rogue instead of aiding the Brotherhood.[16] The depletion of manpower has severely impacted its ability to wage war, with fallen veterans replaced by relatively inexperienced soldiers promoted out of necessity.[Non-game 2]

The NCR has stopped actively searching for Brotherhood bunkers by 2281 to focus on the NCR-Legion War.[17] Despite ongoing hostilities, the NCR is willing to continue its pursuit and elimination of the Brotherhood. However, in the interest of strategy, it is willing to form alliances with surviving chapters, provided they are not at crossed purposes.[18]

Although stationary, Lost Hills, the heart of the Brotherhood out West, remains under Brotherhood control as of 2287, and the elder council remains in power. The elders continue monitoring far flung chapters, reestablishing contact with Lyons' chapter in D.C. and reintegrating it after the rise of Arthur Maxson. Cults dedicated to the new Maxson started to emerge on the West Coast, routinely suppressed by the council.[19]

Although victorious, the NCR suffered greatly on the economic front. When the Brotherhood could not counter the Republic's military advantage, it attacked the gold reserves that backed the New Californian dollar, robbing its gold reserves.[Non-game 3]

As the raids intensified and gold became unavailable, destroyed or rendered useless by Brotherhood operations, NCR citizens panicked and rushed to reclaim the listed face value of currency from NCR's remaining gold reserves. Since the NCR was unable to realize these withdrawals, particularly towards the frontier, value in their currency considerably dropped. To protect against actual economic collapse, the NCR government abandoned the gold standard and established fiat currency, not payable in specie. Since then many wastelanders lost faith in it as a medium of worth, both as a result of it not being backed by anything but the government's word and the inevitable inflation. In response to the loss of faith, merchant consortium of the Hub re-established their own currency, the venerable bottle cap, backing it with water by exchanging a standardized measure of water for caps. (The traders of the Hub had introduced the bottle cap a long time ago, but had switched to NCR dollars as the "default" currency instead of bottle caps.) The decision to reintroduce the bottle cap as the leading post-nuclear currency was born out of frustration stemming from NCR's ineptitude in handling the currency crisis.[Non-game 4][Non-game 5][Non-game 6][Non-game 7]

The NCR Brotherhood War is an ongoing war, with many of its battles being mentioned in Fallout: New Vegas.