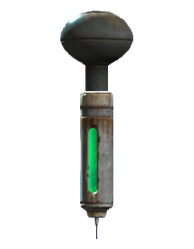 The mysterious serum is a consumable item in Fallout 4.

This unique consumable is only obtainable through the quest lines of Special Delivery and the Secret of Cabot House.

Eleven can be obtained during these quest lines, twelve if the player character can pass a speech check convincing Jack Cabot that no serum was found, or thirteen if the player character sides with Lorenzo Cabot to the very end of the Secret of Cabot House quest. Should the player character decide to free Lorenzo, they get access to an infinite supply of this item, with a few caveats. One may only receive one at a time and only when the Sole Survivor has none left, and the serum cannot be sold. Also one can not hoard the serum in storages because Lorenzo will know if the Sole Survivor has a vial of it stored somewhere in the Commonwealth.

The item's description lists a Radiation effect of -36000, but this is misleading, as it does not act like a RadAway. Rather, this number comes from removing 10 rads per second for 3600 seconds (60 minutes or one hour).

One potential use is for boosting carrying capacity while scavenging. The boost of +5 STR is significant, as the similar consumable Buffout only gives +2, and any chem mixed with it +3.

Another use is most helpful when the perk Ghoulish is acquired and fully upgraded. When standing in irradiated water without Radiation resistance, the player character will effectively take no new rads but can gain up to 15 Hit Points per second.

The mysterious serum can be used to heal Andre Michaud in Far Harbor, but Lorenzo will no longer give the player character anymore if used in that way.

Just like all other anti-radiation drugs, in Survival mode it is affected by Immunodeficiency.

Retrieved from "https://fallout.fandom.com/wiki/Mysterious_serum?oldid=3512655"
Community content is available under CC-BY-SA unless otherwise noted.