The mysterious guidestone, otherwise known as the Horse Creek Petroglyphs,[1] is an unmarked location in the Savage Divide region of Appalachia. It is located above Federal disposal field HZ-21.

Shortly before the Great War, Professor Michael Blake and a student named Jacquelyn were devoted to studying a set of unique petroglyphs that had no real equivalent among old European runes, or existing Native American petroglyphs in West Virginia.[2]

According to BADTFL Agent Curtis Wilson, the petroglyphs were important, Jacquelyn alleging them to have an extraterrestrial origin. Although Blake disagreed, he nonetheless kept his notes on the guidestone in offline storage, just in case the data was corrupted, rather than out of paranoia.[3] Agent Wilson also kept his own notes on the guidestones, but had locked his terminal with all his files due to being hunted by a government institution, presumably the Enclave.[4]

The mysterious guidestone appears only in Fallout 76, introduced in the Wastelanders update.

The Horse Creek petroglyphs exist in real life, located south of Oceana, West Virginia, in Wyoming County. Their origins have been the topic of speculation, ranging from being extraterrestrial or carved by Irish monks in an ancient alphabet known as ogham before Colombus' arrival to North America.[5] Scientists, however, have documented that the petroglyphs' origins are most likely the indigenous peoples who inhabited the region until the mid-17th century.[6] 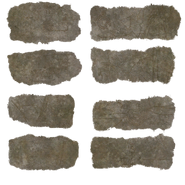 Etching details
Add an image to this gallery

Retrieved from "https://fallout.fandom.com/wiki/Mysterious_guidestone?oldid=3258613"
Community content is available under CC-BY-SA unless otherwise noted.