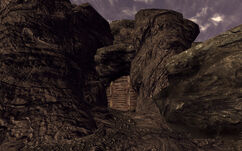 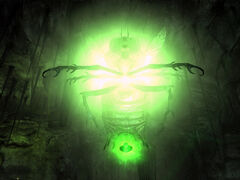 The mysterious cave is a location in the Big MT in the Fallout: New Vegas add-on Old World Blues.

The mysterious cave is located south-southeast of Big MT north tunnel and southeast of Forbidden Zone dome entrance. It has nearly the same layout as broc flower cave, without the radioactive barrels and lit torches. It is west-northwest of Elijah's Watch.

The map marker on the compass may only appear when at the Forbidden Zone dome entrance, making it difficult to find the cave. [verified]

Add an image to this gallery
Retrieved from "https://fallout.fandom.com/wiki/Mysterious_cave?oldid=3150022"
Community content is available under CC-BY-SA unless otherwise noted.