Myron is a teenage pharmacologist and sexual predator in New Reno, credited with the invention of a cheap, mass-produced variant of Jet for the Mordino crime family. He serves as a potential companion for the Chosen One in 2241.

A pasty-faced teenager with greasy hair and the faint smell of laboratory formaldehyde hanging seemingly permanently about him,[1][Non-canon 1] Myron is a intellectually gifted teen responsible for the (alleged) invention of Jet for the Mordino crime family of New Reno.[2] In reality, Myron lied about inventing Jet (which was created pre-War),[3] but in modifying the manufacturing process to be faster and cheaper.[4][Non-canon 2] The first samples arrived in Redding in January 2241 and began addicting miners en masse, bringing the strategic town closer to Reno.[Non-canon 3] The Mordinos rewarded Myron lavishly, with a steady supply of luxurious goods, prostitutes, money, and an entire dedicated laboratory and manufacturing plant located at the Stables north of the city.

His adolescent accomplishments left him with numerous personality flaws. He is boastful, arrogant, self-centered, and has seemingly unmitigated sex drive many prostitutes servicing him find unpleasant. His efforts to refine his "pet project" are motivated not so much by greed, but by his desire to prove to himself that he was, is and will be a genius in the field of entertainment chemistry.[5] In addition, he also had taken to developing a new type of mild hallucinogen, although it was less addictive than Jet.[6] He cares little for others, least of all slaves, who he treats like objects rather than human beings. Mutants earn even less respect from him.

Myron was stabbed to death by a Jet addict less than a year after the defeat of the Enclave, while he was drinking at a bar in the Den. His name was quickly forgotten, as was his claim of the invention and the development of a refined manufacturing process of the infamous drug.[7]

Myron can make the following chems if given the ingredients he needs to make them:

To get the option, one must first mention super stimpaks when selecting how many regular stimpaks to make with Science 76% and INT 8.

"Okay, okay! I'll wait here! Phew. You could show me a little more respect, you know. I am MYRON."

"So you finally wise up, beautiful? Finally realize that I'm the only one for you?"

"Guards ain't worth the chips you pay for 'em...well, my retarded friend, we've been introduced, so why don't you GET THE HELL OUTTA HERE NOW!"

Myron explains the history and chemical properties of the highly-addictive drug Jet. 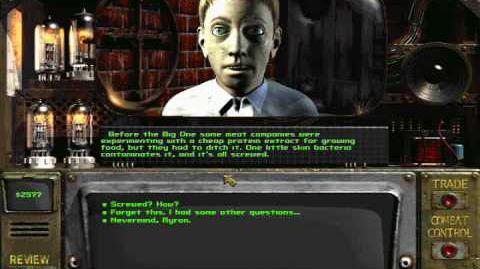